What if You Only Changed One Thing? 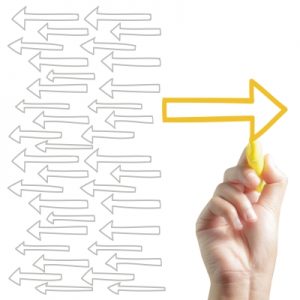 This idea is as old as dirt, I suspect. It may not be new, but it is so psychologically significant that I don’t have the ability to cite all of the authors or studies who have supported, touted, promoted, suggested, and written about the idea as a way forward toward a goal. What matters is this: anyone can change just one thing and experience results.

Let’s face it: planning for your life in financial terms can seem a bit daunting. We’re talking long-range goals and really big numbers. It’s easy to contemplate it, become overwhelmed, and say, “Not today! I’ll dive in tomorrow.” And then, as it inevitably does, tomorrow becomes the day after, then a month later, and soon you’ve lost another year. Sounds familiar, doesn’t it? It happens to all of us in one way or another. For some, it’s finances. For other, it’s weight loss. What if we could remove a little of the pressure and make it easy to find a starting place?

I’m not suggesting that creating an encompassing, comprehensive plan that considers short-term, medium-term, and long-term goals and outlines a roadmap for achieving them isn’t valuable or necessary. On that contrary, I think the process is absolutely essential. After all, without knowing what important achievements, values, and dreams we’re working toward, the day-to-day activities and steps we take seem somewhat less deliberate and methodical.

Instead, what I’m suggesting is a little step toward the big plan. Think of it as a placeholder, so that another month or year doesn’t pass by with no financial progress to show. Let me provide an example. Picture yourself in your early thirties. You’re unmarried, contemplating a career change, earning just enough to get by, and dreaming of buying a home. It seems that every conceivable ball that could be up in the air is circling your head at top speed. How on Earth, you wonder, could a long-term plan be put in place? Perhaps it can’t. But that doesn’t mean you can’t make one good financial decision now in an effort to enable future good decisions later. What if you made the commitment to skip going out to dinner once each week? So rather than eating out five times, you only do so four times. If it saves $20 each week, it’s $80 in a four-week month. In a 52-week year, it’s $1,040. While the example may seem insignificant, consider what one good decision can mean over the course of a decade, $10,400.

What could one decision mean for you? What could increasing your 401(k) contribution by X% mean over the long term? What could rounding up your car/house/boat payment to the next round number do for you? What would an extra $50 per month in your child’s college fund mean to them when they enroll as a freshman in college at age 18?

One change, whether big or small, can make an unbelievable difference in your financial life. What one change will you make and what could it lead to for you?

Image courtesy of Naypong at FreeDigitalPhotos.net